It’s Book Week again. I was thrilled to have been invited to last Friday’s Children’s Book Council of Australia (CBCA)’s Book of the Year Award presentations for 2016 at Teachers Federation House, hosted by CBCA NSW.

Classes at Penrith PS have been busily creating displays for the school library. Every few minutes, another display arrives and we seek out an ideal spot for it. This has been a tradition at the school for many decades.

Apart from the links at Mrs Mac’s website and the Kids & Books blog, here are some useful Youtube clips to help us celebrate “Australia! Story Country”, the 2016 theme: 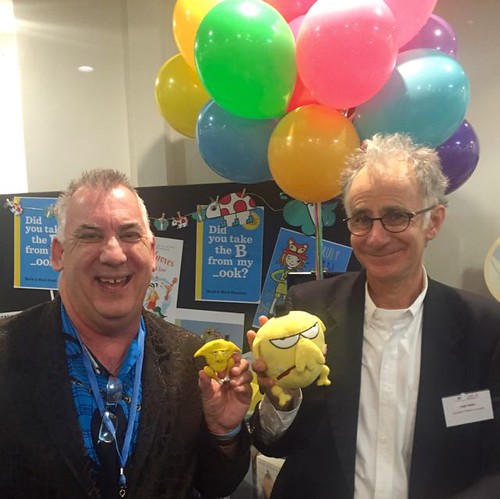 Thank you everyone for a thoroughly enjoyable conference last weekend (Menzies Hotel, Sydney). Gail Erskine, Felicity Jagavkar-Baker, Margaret Hamilton, and all the volunteers, did a spectacular job. As a veteran of many science fiction media conventions (as an attendee or committee member), and a number of TL-focused PD seminar/conferences (sometimes as presenter, or attendee/volunteer/committee member) over the decades, “Read: Myriad Possibilities 2016” compared very well.

This was my first CBCA Conference. The two full days had wonderful variety and no dead spots at all (that I noticed), and it appeared to be very seamless. I loved that the early release of the “Notables” enabled publishers to have every shortlisted title available for sale on the day of the Shortlist announcement on the Friday. (I know there was some trepidation about this when first announced.) I ordered my school’s books from Paul Macdonald on the Friday, and they arrived at school on Thursday, a day earlier than promised.

The authors and illustrators at the conference made themselves very available to all, and autograph sessions were well timed and well promoted.The Committee appeared unflustered most of the time, and glitches were quickly addressed. (And in the timeslots where I volunteered, everything seemed to be set up for success. Much appreciated!)

I also attended the Leigh Hobbs’ Masterclass (see pic above) arranged by the Australian Society of Authors in Ultimo, on the Sunday after the conference! It, too, was excellent. Worth every cent.

In association with the Children’s Book Council of Australia’s NSW Branch, and teacher librarian Jackie Hawkes, I have set up a blog to help students to explore the 2016 CBCA Book of the Year Awards, the “Notable books”, Short List, Honour Books and gold-medal winners, and to support CBCA NSW initiatives, such as the Kids AAA event.

Check it out: HERE. Early days yet! Read across the universe!

Here are this year’s displays from classes to help us celebrate Children’s Book Week. Apollo the powerful owl by KP Read across the universe mobile by 3/4W Read across the universe by 1/2St The pros and cons of being a frog by 3/4B The whale shark song by 1/2B

Read across the universe Culture Pod by 5/6E. With Nan by KF Tom the outback mailman by 3/4L

We have also had a lot of fun with these hilarious picture books (from New Zealand) this Book Week. By Mark and Rowan Sommerset: Whatever you do, don’t accept smarty tablets from a sheep. Nor lemonade from a turkey.

An Auslan presentation is available HERE.

This week, Early Stage 1 and Stage 1 classes are investigating the topic of “Trees” (and “forests”), and relating it back to the fairytales of Hansel and Gretel and Goldilocks, and to previous work on “Autumn” leaves.

Books to be used include Seed to plant by Melvin & Gilda Berger and Trees (Go facts plants series) by Paul McEvoy.

Acorn to oak filmed over an 8 month period time-lapse

The 2013 CBCA Crichton Award nominee, “A forest” by Marc Martin, will also be a useful resource for this topic. I recently found the following clip on Youtube which carries similar environmental messages. It is an animated short by Aspen Center for Environmental Studies “exploring how forests affect, and are affected by, the forces around them”:

What’s happening in our forest?

UPDATE:
In 2010, author Jackie Kerin and Malcolm McKinnon created a video about Edith Wilkinson and James the lyrebird, who are now featured in “Lyrebird!: a true story”:

Congratulations to Year 4 at Pilgrim School, Aberfoyle Park Primary School Campus, South Australia, for sharing a great new Photo Peach slideshow, “Our favourite parts of Australia”. The students were inspired both by the artwork and written text of “Why I love Australia” by Bronwyn Bancroft (which is one of this year’s CBCA shortlist, Category: Picture Books), and the digital slideshows Penrith PS students have been creating in recent months. The Children’s Book Council of Australia (CBCA) released its 2011 shortlist of nominated children’s book titles for Book Week last Tuesday, and the mad scramble – to make sure school library collections have the books – has begun in earnest.

When the stores say a shortlisted title is “not available”, that’s because it has already sold out of its initial print-run everywhere (ie. the warehouses are often empty long before the nominations come out, or they are cleaned out the day the shortlist is announced), and the publisher is now attempting to get a second printing done in time for Book Week. That attempt is usually successful, at least for the city stores in most states. Sadly, books that don’t make the shortlist often never get a second hardcover printing. That precious nomination is often their key to longevity. Publishers are very frugal and only very strong sellers and award nominees get a second bite at the market. Paperback versions of nominated hardcovers often don’t get scheduled until the approaching Christmas season, too late for Term 3 Book Week celebrations.

I have permission from my Principal to round up the titles in whichever bookshops I happen find them in, hopefully in ones that offer us a decent discount. I haven’t bought any books for the library since last Easter (except the 2010 shortlist) because of our BER rebuilding, so my 2011 shortlist shelves were totally bare. I’ve been treasure hunting shops since last Tuesday when the list came out – and I have actually found almost everything (including most of the Crichton Award nominees for first time illustrators). Often it’s the lone copy on a shelf I find, but a surprising number of the titles have been in reasonable supply this year. I resist just back-ordering the whole list from one seller at this time of year, because inevitably I see older, first printing copies in forgotten corners all over Sydney, when I could be using them with the students, but the shops also dislike it when you keep canceling books from the order. This time of year drives the booksellers crazy, and it also seems unfair to think of all those wonderful books that just missed out making it to the Notables list, since they are probably destined to be a distant memory.

So there’s no easy answer. I happen to enjoy the treasure hunt, and am usually very successful. Several of my favourite haunts see me walk in the door and they say, “Ah, we know what you’re looking for!”, even if it’s been a year between visits.

The theme this year is “One World, Many Stories”, and is neatly served by this cute song on Youtube.