Stage 1 students worked in small groups in Term 2, 2010 with the teacher-librarian, designing storyboards for digital stories based on famous fairy tales. Here are the completed PowerPoint presentations:

* The three bats, a digital fairy tale by Class 1/2H, loosely based on “Goldilocks and the three bears”

* Mr E and the three bears, a digital fairy tale by Class 1/2H, based on “Goldilocks”

* Handsome & Gentle, a fractured fairy tale by Class 2FR, based on “Hansel & Gretel”

* The ugly caterpillar, a digital fairy tale by Class 1K, loosely based on “The ugly duckling”

* Cockatoo and Tiger, a digital narrative by Class 1K, inspired by “The ugly duckling”

* The ladybug who lost her spots, a digital fairy tale by Class 1S, partly inspired by the picture book, “Swimmy” by Leo Lionni

* The ugly duckling, an assembly item by Class 2FR.

In Term Three 2009, groups of Stage 2 students at Penrith Public School worked with our teacher-librarian, Mr McLean, to create and upload Powerpoint presentations of the “Bear & Chook” adventures, explanations and procedures we wrote up as storyboards.

Looking in rock pools by 3M

How to make a hanky hat by 3G

Rowing a boat by 4W

How to make a cannonball fly! by 4W

How to make warm honey toast by 3G

Stay safe in the surf! by 3G

We hope that other schools enjoy our work.

The Early Stage 1 and Stage 1 students of SCLB (2009) retold the Aesop’s fable of:
The grasshopper and the ant.

A combined group of Early Stage 1 students of KB, KFM and KI (2009) retold the Aesop’s fable of:
The hare and the tortoise. 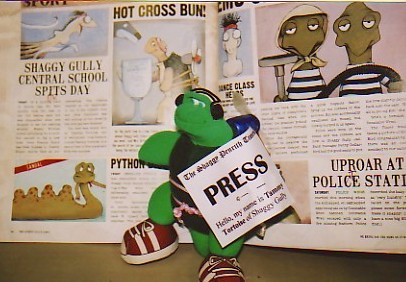 The Early Stage 1 and Stage 1 students of SCLB (2009) also created this sequence of photos. The words are by the Kindergarten rap representatives of 2009. This is a retelling of Aesop’s fable of:
The lion and the mouse. In 2010, Class SCLB added an illustrated joint construction to retell the story of the children’s opera, Fox. Please click on the hyperlinked title to download our PowerPoint show.