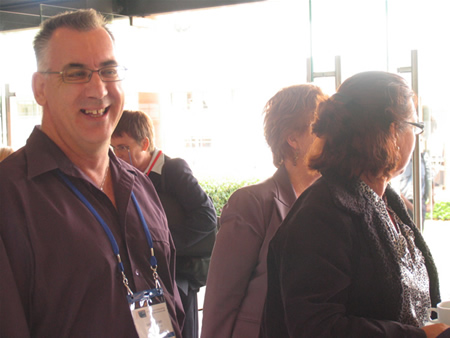 I set the alarm clock for 6.00 am this morning, fully intending to swing past the school, on my way to the railway station to attend the first day of School libraries leading learning, the NSW State Conference of ASLA and the Department of Education and Training. (To my horror, it was still pitch dark outside. My dog looked at me, quite bewildered, and wanted to refuse the only chance he’d have to relieve himself, and I eventually decided to phone in the last-minute instructions to my replacement in the school library. By sheer luck, it wasn’t a heavy teaching load day; much of her day was to be spent policing the preview browsing of the annual Book Fair, which starts in earnest next week.)

I’ve spent many snatches of time over the last month, tinkering with the text and images I intend to use for my talk on Saturday (“Working with wikis”), and I was a little daunted, judging by comments in the organisers’ emails that most of the other presenters were beavering away on PowerPoint presentations, but I had decided to upload my speech notes and dot point headlines to a page on the school library wiki instead. So, unless there’s a power glitch at the conference tomorrow, I can demonstrate the wiki – live – at the same time as I flash up my notes. That’s the idea, anyway. We’ll see. (In fact, I’m tempted to revamp them a little, to incorporate some of today’s ideas – see below; if the notes had been a physical handout I’d printed off during the week, I’d have been stuck!)

Today there were fascinating, insightful and encouraging speeches from Dr Ross J Todd (Keynote, plus “Guided Enquiry: from Information to Knowledge”) and John Callow (“Literacy & Diversity: from Shakespeare to Second Life”), both of whom took their areas of expertise to the next level, with the challenges of Web 2.0 high on the agenda. I know Ross as a lecturer and tutor from my UTS days (retraining as a teacher-librarian in 1990). and then as Scan‘s Research Columns touchstone. John, I’ve known since he visited my previous school as our then-DSP (Disadvantaged Schools Program) literacy advisor, and again through Scan when I commissioned him to write some articles about visual literacy and the then-“new learning environments”. I thoroughly enjoyed their sessions and I am glad that ASLA NSW’s website will have their PowerPoint presentations available to attendees. I did take notes as well, but on paper. With a pen. The old-fashioned way. 😉

I also attended a Judy O’Connell session on “Learning is a multi-modal conversation”, which opened up an enormous number of possibilities, although many of the Web 2.0 facilities Judy uses in her current school are blocked to NSW DET schools by our firewall. If teacher-librarians are yet to come to terms with blogs and wikis, then Facebook, My space, Twitter and Second life are going to be very daunting indeed! Judy also challenged the audience to consider why no one appeared to be: using their mobile phone (to send off live shots of the conference proceedings direct to their blogs); or tapping away on Twitter (on their laptops) while she spoke; or seeing the conference as a live feed to overseas locations. Interestingly, such phenomena has been slow to hit our shores – or at least this conference – and this is clearly the next wave of information-sharing habits which will become status quo for conference audiences verysoonnow.

In fact, a brochure I read a few weeks ago, about an upcoming Australian tour by Jamie McKenzie (of “From Now On” website), actually encourages attendees to bring their laptops to the interactive keynote sessions of that event. Well, I’ll have the school laptop with me tomorrow, for my session, but I’m afraid I hadn’t thought that having my head over its keyboard while Judy and the other speakers delivered their talks today. And I’d actually made an effort to turn off my mobile phone – as a courtesy, I’d thought, to the speakers.) I guess it was a reminder that today’s youth (seemingly) have no trouble doing two or three online tasks at the same time. Judy’s words were certainly food for thought.

What was even more daunting about today’s proceedings was the revelation that studies are showing that students are, in effect, “powering down” when they come to school – not only their Web 2.0 devices, but also their brains. Lots of today’s youth can’t wait till they get home from school so they can start being creative and networky on their Facebook, My space and other online social networking pages. Tapping that moth-to-flame attitude in schools seems to be one of our educators’ current challenges. I eagerly await the arrival of my school’s first interactive whiteboard.

I was part of an afternoon panel, with Ross and Judy and Jan Radford. Our topic was “How do you see Web 2.0 working in Australian schools?”. I was expecting a typical four-people-behind-a-desk arrangement, with general questions at the end. In fact, the four speakers were each given ten minutes at the microphone across the other end of the stage. We were going alphabetically and, with a name like “McLean”, I’m quite used to having a turn towards the middle – in fact, I was set to speak first! Mmmmm. Another challenge.

In my session, I aimed to give a pocket history of my own learning curve, and the recent steepness of that curve as I embraced Web 2.0 ideas – but I hope I was also successful in conveying the energy and excitement that the students’ learning had produced. Ross, by virtue of a surname ending in “T”, went last and he was able to give a wonderful, succinct summary of our reported achievements – and even mentioning a few of my points I’d managed to meander away from. He also offered three important culminating points (which I hastily scrawled down) because they’ll make my Saturday solo session so much stronger.

Essentially, Ross challenged us to:
* have a clear vision for the future of learning we wish to see in our schools, with the teacher-librarian in a leadership role
* build from our own experience, and learn by doing
* chart the learning – ie. demonstrate excellence through evidence-based practice.

Well, I’m off to make sure I have all the clear links I need in my speech for tomorrow – the syllabus outcomes, my pre- and post- mini-survey results, and the great student quotes about their emotional responses to the wiki tasks.