K-6PR created these murals yesterday on the IWB. Their current theme is “Sea creatures”. 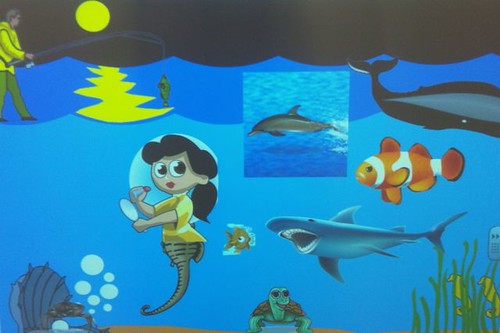 Once upon a time, there was a mermaid. She was looking in her mirror to put on lipstick. A shark came to eat the fish swimming around her. The mermaid could see the shark behind her in the mirror.

The man caught a fish on his fishing rod. The man saw a dolphin jumping high. It was going up and down.

The crab is finding a pearl in the clam.

The whale is coming up out of the ocean to spray water out of his blowhole.

The seahorses were watching the shark chase the fish. They were hiding in the seaweed because they didn’t want to get eaten too. 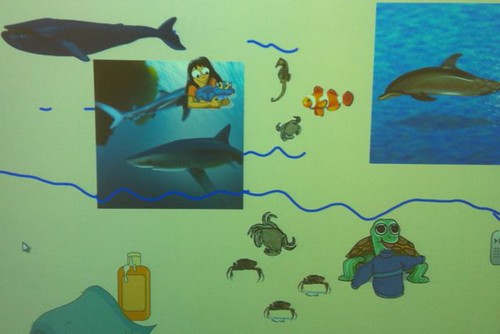 The whale can move through the water by swishing his tail. It is looking for krill to eat.

The shark is swimming and wants to eat the turtle. The turtle is on the beach so he can be safe. He wants to go into the water to find food but he is scared of the shark.

The dolphin wants to make friends with the clownfish.

The crabs are digging lots of holes in the sand because it is time for bed.

The mermaid is cuddling a fish because he is her friend. The sunblock on the beach belongs to the mermaid. She uses it when she comes out of the water and her magical tail has turned into legs. 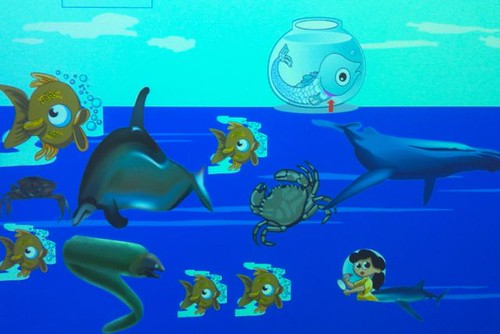 We can see a whale.

We can see a mermaid putting on her lipstick. She has a fish tail instead of legs.

We can see a fish with bubbles coming out of his mouth. There are five orange fish blowing bubbles.

We can see a dolphin swimming.

We can see some crabs swimming in the water. They are playing “Hide and Seek”.

We can see two fish swimming together.

The eel is chasing the fish because he wants to eat them.

The fat dolphin wants to eat the fish.

The blue fish is in a bowl. 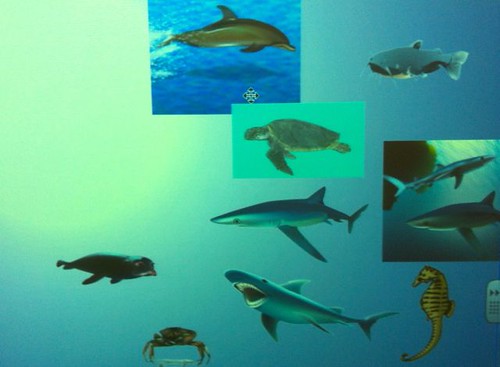 Once upon a time there was a shiver of sharks. The sharks wanted to attack a seal because they were hungry. This is why the seal looks so worried.

Meanwhile, a dolphin was swimming towards a catfish. He was going to teach the catfish how to jump. This was so the catfish could get away from the sharks.

The crab was planning to use his nippers to catch the seahorse’s tail. The seahorse wants to make friends with the catfish.

The sea turtle is swimming towards the shallow water where the sun is shining through. She is ready to lay her eggs in the sand.

When we were writing the above story we needed a collective noun for a group of sharks. We read that it could be a school, a shoal, a pack or a shiver of sharks. Here are some more interesting collective nouns:

A cast of crabs.

A pod of dolphins.

A school or shoal of fish.

A gam of whales.

A bale of turtles.

A bob of seals.

I’m not sure how many of you are aware that the free online facility for making digital slideshows, Photo Peach, had a massive crash in mid December, when its owners were trying to do a major upgrade. Despite their efforts, two backup servers failed simultaneously and they’ve unfortunately lost about 50% of people’s stored data between two specific dates. Sadly, this has meant numerous pieces of my work with students have lost their images – and sometimes the captions as well. The good news is that I can slowly rebuild the slideshows (which will give each one a new URL, and will require lots of changes to old blog entries and bookmarks) – thank goodness I saved all the students’ paper storyboards for the trickiest ones (ie. the Stage 3 students’ Endangered animals: beyond the rainforest Guided Inquiry material of 2011).

I had only just bought a Photo Peach subscription for my own material, but had not yet downloaded anything to my hard drive (which is the main reason for purchasing a subscription). “Endangered animals” was not included in the subscription, being on a separate, free, user account, so it’s been quite traumatic facing this loss. It seems that viewer comments (and most of our lists of Creative Commons photographers, whose Flickr pics were used) are safely preserved on the now-skeletal slideshows, so I am even able to restore these. Very time consuming, but hopefully worth it, since I use – and revisit with students – this material often, including at professional development presentations with teachers.

I shall keep you posted as other popular slideshows get restored. I say “almost” because the segments leave us, each one decorated with a portion of mural, dating back to 1998. To see the mural in closeup, please click HERE!